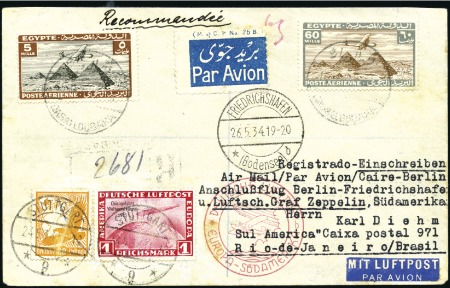 1934 (May-June) Zeppelin 1st South America Flight, NON-CONTRACT despatch unlisted by Sieger or Michel, registered cover posted on the outskirts of Cairo with MIXED FRANKING of 65m Egypt airs tied May 15 plus Germany 1.80RM total incl. 1RM Chicagofahrt, tied en route at Stuttgart (May 24) and believed carried by KLM via Amsterdam for part of the route, F’hafen despatch (May 26) and red cachet (code « b »), with Rio final bs of May 29 as addressed there (carried from Recife via the Condor Syndicate the same day). It is thought no more than 5 such covers were prepared; one stamp with natural paper fold else very fine and most uncommon Zeppelin showpiece (Sieger 247 variety)