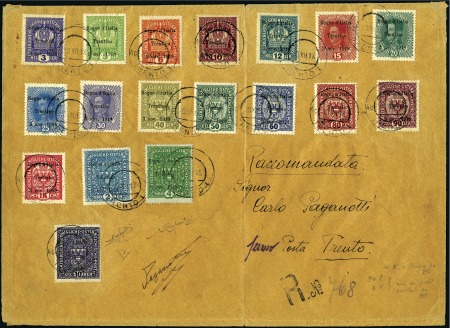 AUSTRIA – Italian Occupation of the Trentino (Trieste) The ONLY KNOWN EXAMPLE of the 1918 10K Dark Violet on Cover 1918 3h to 10K “Trentino” overprints, the set of eighteen values including the extremely rare 10K Dark Violet (Scott N50, $77,500 mint, not priced used), tied by December 20, 1918 Trentino postmarks to large registered cover addressed locally, folded vertically not affecting the stamps or markings. Besides being the ONLY KNOWN example of the 10K Dark Violet on cover, the 2K is the granite paper printing (Scott N51, unpriced used), and the 90h and 4K are rarities on cover also. A stunning and magnificent showpiece of these issues. Only 31 of the 10K value were issued, from two printings, and only 11 were in the Dark Violet colour; this stamp is from the second printing (which included 10 of the 10K Dark Violet). Included is collateral material, mostly letters from people involved with this issue: one from the owner of two examples of the 10K first printing (including the unique 10K Dark Violet, received at the time of issue), and others from dealers of the period Expertise: accompanied by two Raybaudi certificates (1981 & 1984), 1988 E.Diena certificate, plus one from the Schweizer Philatelistenvereine issued to E. Luder & Co. in 1941