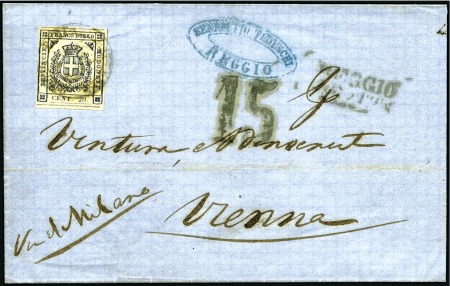 1859 20c Purplish Black, the scarce colour, large margins, tied by Reggio cds dated 16 October 1859 – the second day of use and the earliest known from Reggio – to cover to Vienna via Milano (transit and bs on reverse), stamped « 15 » (soldi) due for single-weight letter over the third distance step (Milano-Vienna) due to suspension of the Postal Convention between the Kingdom of Vittorio Emanuele II and the Austro-Hungarian Empire. Important and beautiful showpiece