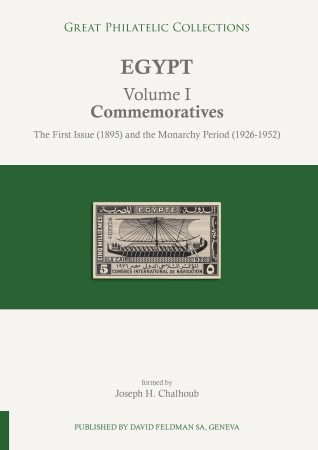 This is the Volume I of a series of books dedicated to the Egypt Collection formed by Joseph H. Chalhoub.

Egypt became a monarchy in 1922, this collection presents the unissued 1895 commemoratives and the monarchy

commemoratives period 1925 to 1952. The commemoratives of the monarchy are quite rich in material for the collectors: essays, proofs, color trials, imperforate and varieties.

There are essays for many of the commemorative stamps during the monarchy period. All the stamps of this period other than the 1926 King Fouad 58th Birthday, were printed by the Survey Department, Cairo. A. J. Hewitt was the main artist with the Survey Department, so many of the essays were produced by Hewitt. Essays include pencil or ink sketches and drawings on tracing paper or card, hand-painted essays on card,

Royal Imperforate Proofs were printed on card stock ranging in thickness from .004 to .007 inches. They are also known as “cancelled-on-reverse” stamps. They are unwatermarked and ungummed. They were first introduced in 1926 and continued until the abdication ok King Farouk. “Cancelled” was printed

in English (and later in Arabic, as “ ملغى†”) obliquely and in series across the back of each sheet, printed in black ink by stone lithography, prior to the application of the stamp image. Arabic was first used for the 9 March 1947 issue – 25th International

The pane of the 5m of the 1926 12th Agricultural and Industrial Exposition set was printed with its stamp image on both sides (the image on one side being printed atop the word “Cancelled”).

The Royal Oblique Perforated stamps were prepared on regular watermarked and gummed paper. They were first

introduced in 1926 and continued until the abdication of King Farouk. Two obliquely perforated panes were printed from each plate put to press.

The 1926 12th Agricultural and Industrial Exposition set had the 5m, 10m, 100m and 200m sheets perforated twice, once obliquely and once normally, while the 15m and the 50m panes

were only obliquely perforated; only one pane of 50 was prepared for this issue.

Color trials were produced for several commemorative stamps starting with the 1895 Foundation of Winter Festivals unissued set and throughout the monarchy issues. These trials consist of

They were produced in single stamps or in sheetlets of 9 stamps (3 x 3). Colour trials of the 1943 overprint are also illustrated.

Some foreign postal administrations stuck the stamps of all countries received from the UPU into a record book, handstamping them. Each such country used a different device, some circular, some straight, some reading SPECIMEN or equivalent. These were applied to single stamps or strips of three, as received. In this collection, we are showing examples of the London, the Mauritania and the Goa Post Offices.

Several commemorative stamps were issued imperforate. Typically, one to two panes have been recorded.

Starting in 1937and continuing until 1950, the Palace received sheetlets of certain stamps or their colour trials. These sheetlets are imperforate and on watermarked paper. They typically consist of 9 stamps (3 x3), however, sheetlets of 4 were also printed. One to three of these sheetlets for certain stamps were prepared and sent to Koubbeh Palace in no particular pattern.

The commemorative stamps had a relatively short usage period, typically between 30 days and 120 days. Non philatelic covers of these stamps are somewhat scarce especially for the issues with the shorter usage period. Proper usage on cover or parcel cards of the 50 piastres and 1 pound stamps has not been recorded.

Several prominent collectors of Egyptian stamps have put significant efforts over the decades in studying and building comprehensive collections in several areas of Egypt philately, namely: the first 3 issues, the Suez Canal, the De la Rue, the Crown Overprints, Postage Due, Officials, Foreign Post Office in Egypt, Egypt stamps used abroad, Postal Stationery or Airmail. There were no serious attempts to build or exhibit commemorative stamps, yet this is one of the richest part of Egyptian philately. Rich in philatelic material and historical events within Egypt. Many of the high profile events are well represented in the commemorative stamp

unique or rare items are presented. The collection also presents the unissued commemorative set of 1895, the forerunner of the commemorative stamps to be issued 30 years later.