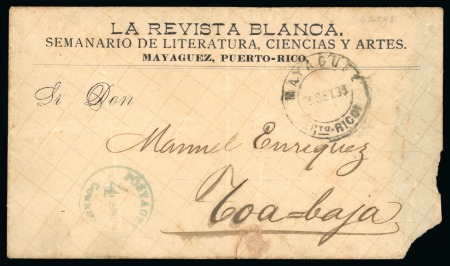 Mayaguez Provisional. 1898 (Sept 9). “La Revista Blanca” commercial envelope from a cultural weekly magazine addressed to Toa-Baja, bearing provisional “POSTAGES/4cts/CORREOS” handstamp in blue, “Mayaguez/Pto Rico” cds, with El Dorado receiving backstamp in violet, which was the office handling the mail from and to Toa-Baja, as this small town did not have a post office, some creases, slight toning and bottom right corner of the cover torn off. This item is accompanied by a statement of facts signed by the Secretary of the Municipality of Toa Baja, Mr. Manuel Enríquez, stating that he was present when the letter was received and that he kept the cover as a curiosity. This is the only example recorded of the Mayaguez forerunner postmark; as such, with the postmark including a postal value, it may be considered as important as an issued stamp with only one example available; a gem of the United States possessions; ex Junghaans.

Note: As in other localities, this Provisional was into force when stamps were not available after the land of the U.S. troops. This handstamp features a 4c denomination, in contrast with the provisional stamps of Ponce and Coamo which carry a 5c value, and differs from other provisional postmarks which were undenominated. The 4c handstamp therefore has greater significance.