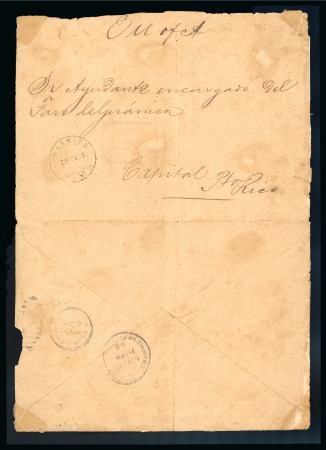 Guánica Provisional. 1898 (Nov 22). Cover sent to the assistant in charge of the lighthouse in San Juan, showing faint strike in violet of “CORREOS./POSTAL/Guanica P.R./E. U. of A.” , accompanied by Guánica cds adjacent, showing on reverse scarce usages of MIlitary Stations No. 7 of Yauco and No. 4 of San Juan on reverse, usual toning and edge faults at top; one of only two examples recorded of this provisional. Ex Sanborn, Preston, Scalley and Gallagher.

Note: The U.S. troops landed at Guánica on July 25, after the retreat of the Spanish troops together with other government personal, taking with them stamps and basic devices as cancellers. As in other few occupied towns, Guánica made provisional franking postmarks, since they were fearful Spanish stamps would not have been accepted by the Americans. The heading of this cover, “E. U. of A.” for “Estados Unidos of America”, which also appears in the Provisional handstamp, presumably written by the postmaster of Guánica, was a mixed Spanish-English nomination for “Estados Unidos de América” including the English word “of” instead of “de” in Spanish, and it was also an acknowledgement of the American control by local authorities.