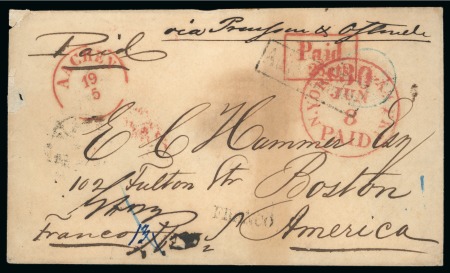 Sweden. 1854 (May). Envelope to Boston, paying the 1 rigdaler 6 skilling banco rate, routed via “Ystad” and “Stralsund” with ds on reverse along with blue “f13” crayon indicating that all transit fees beyond Prussia (13sgr, equal to 30c) had been paid, “AUS SCHWEDEN” hs, red “Aachen” cds, “Americ/Packet” semi-circle on reverse, “PAID/25 cents” hs noting fully paid and 25c to the USA, carried via Ostende and London to Southampton and put aboard American Ocean Line “Hermann”, arriving in New York with cds for the fully paid 30c rate, minor cover imperfections; a rare pre-philatelic cover from Sweden to the USA (no Swedish pre-philatelic cover to the US was included in the Richard Winter collection).