1875 (Sept 21) Opened envelope from Tokyo to Lyon, a rare and fascinating mixed-franking including an exceedingly scarce overpaid French franking

Back to browsing page 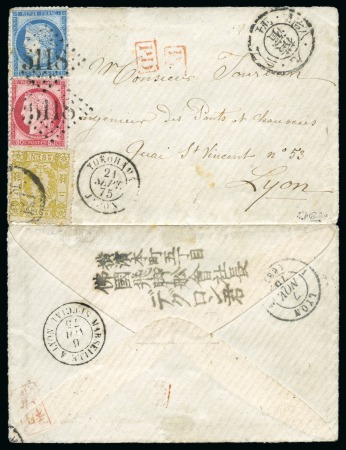 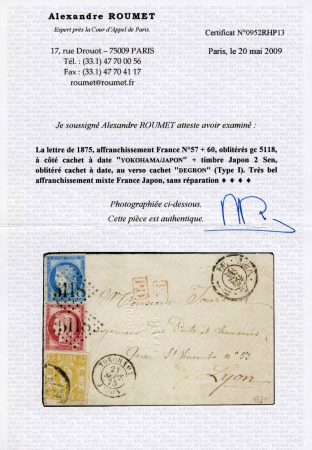 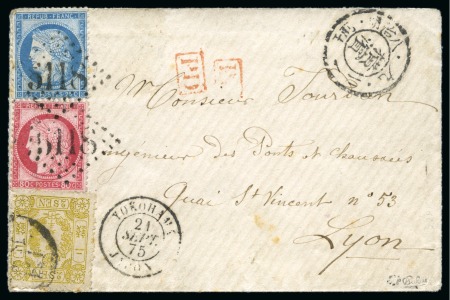 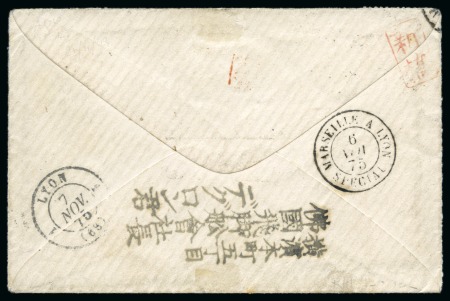 1875 (Sept 21) Opened envelope from Tokyo to Lyon, franked by a member of the French Military Mission with Japan 1874 2s with syllabic (Michel 20x, Scott 34) from pl. 21, paying the single internal rate per 7.5gr to Yokohama, in combination with perf. ‘Cérès’ 25c and 80c, being 5c overfranked for the via French packet single rate (probably due to the fact that the military sender had only available the 25c to complete the franking, which was a denomination usually applied on military correspondence), with dispatch cds tying the Japanese franking and repeated at top right, reverse showing Japanese ‘Degron-kun’ hs type 1 wording in “Yokohama Honcho 5-chome/Futsukoku Kikyakusen Kaisacho/Degron-kun” (Mr. Degron, Chief of French Mail Ship Co., Honcho 5-chome, Yokohama), and red framed Japanese “Teishaba-in” hs denoting that the letter was posted at the Shimbashi Station (this being the first railway station postmark into force in Japan); then delivered to the French P.O. where the French values were tied by “5118” lozenges with matching “YOKOHAMA/JAPON” cds alongside, Marseilles and Lyon cds’s on back; a rare and fascinating mixed-franking including an exceedingly scarce overpaid French franking; cert. Roumet (2009), signed Calves.

Note: The sixteen members of the French Military Mission in Tokyo were exceptionally allowed, as a result of their status, to prepay their correspondence with French and Japanese stamps on the same cover, without using another outer envelope, as regulated by the Japanese “Overseas Postal procedures”. The ‘Degron-kun’ wooden handstamps were produced with the purpose of making its instructional text understandable for Japanese postmen, who could not read a Latin script, and had to deliver the correspondence to Mr. Degron, the Postmaster of the French P.O. at Yokohama. Surviving examples of the “Degron-kun” covers are dated between 1873 and 1877.