Lot 40132 – 1876 The most significant cover of the French mail in China, showing a 10c tête-bêche in a unique combination with a Customs cds of China 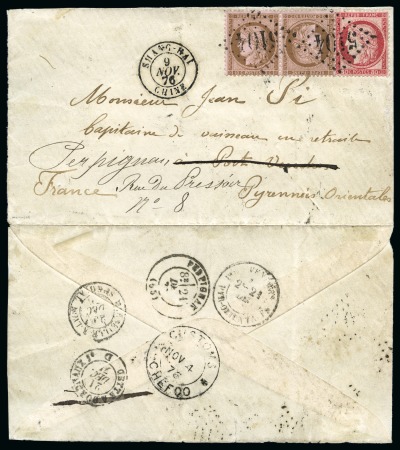 THE MOST IMPORTANT COVER OF THE FRENCH MAIL IN CHINA

1876 (Nov 4) Opened envelope to Port-Vendres, readdressed to Perpignan, dispatched at Chefoo showing “CUSTOMS/CHEFOO” cds on reverse, transferred to the French P.O. bearing ‘Cérès’ 80c and 1871 10c tête-bêche pair, tied by “5104” lozenges with “SHANG-HAI/CHINE” cds at left, French transits and receiving cds’s on reverse; an extraordinary and unique cover as a result of the following features: the only item known bearing a tête-bêche -which is the most significant franking in the French mail in China- in conjunction with a pre-philatelic Chinese postmark; regardless of this fabulous combination, just four covers are recorded exhibiting the Chefoo cds in the stampless period of Chinese philately, this representing the earliest usage of a Customs cds in combination with France, and only about five covers are known bearing a tête-bêche (also featuring the perf. ‘Empire’ 80c) used in the French P.O.; the assembly of these characteristics make this, the most important item of the French mail in china, as well as a most desirable postal-history top rarity for the advanced collection of China, since this item can be considered as the most important Customs Post cover in the pre-stamp period; cert. J.F. Brun (2021), signed Pfenninger; (Yvert €25,000 for the French franking only).