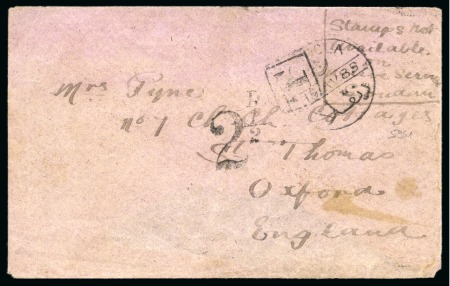 1885 (15.4) Stampless cover from Dongola, Sudan to Oxford, England, cancelled with the relatively short-lived small star and crescent datestamp of Dongola, the boxed T was correctly applied and the 2 1/2 charge mark applied in England where the postage due was collected, backstamped on arrival OXFORD MY 5 85, lower backflap missing, a very scarce usage

Note: GORDON RELIEF EXPEDITION – NILE RIVER COLUMN – Unpaid Officer’s Letter – Stamps Not Available On Active Service. The cover is believed to have been sent to the wife of Ernest Pyne of the Royal Marine Light Infantry (perhaps by some family member or a fellow officer). Pyne was commissioned a first lieutenant on December 6, 1867, and promoted to Captain July 1, 1881. He served in the Ashanti War of 1873-1874 (Medal). He also served in the eastern Sudan campaign of 1885, and was present at the engagements at Hasheen and the Torfek Zeriba, at that near Torfek-on the 24th of March, and at the destruction of Temai. He received the Egyptian Medal with two clasps and the Khedive’s Star.