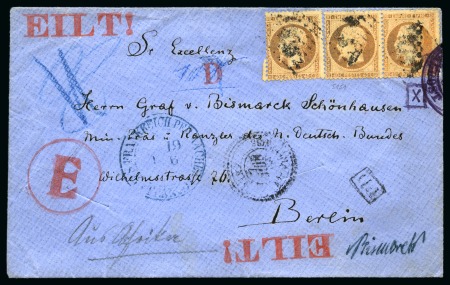 1868 (7.6) Letter from Suez to Berlin, Germany, franked Empire 40c. pair + single, postmarked at the French Post Office SUEZ / BAU FRANCAIS / 7 JUIN 68 circular datestamp, also postmarked in transit on the front AUS FRANKREICH PER AACHEN / FRANCO / 19.6, express markings in red are shown in the front and back: EILT! (means hastens in English) also large “E” marking in a circle, backstamped in transit MARSEILLE A LYON / 15 JUIN 68 circular datestamp, arrival postmark BERLIN / 19.6 and a framed BERLIN / CABINETS – EXPEDITION / 20 6 68 (the day before the outbreak of war between Prussia and Austria), also on the reverse the seal CONSULAT DES NORD- DEUTSCHEN BUNDES ZU SUEZ, a fine and scarce usage full of character

NOTE: This letter is addressed to the Count (later Prince and Chancellor of the German Empire) Otto von Bismarck, known as “the Iron Chancellor”. This letter is signed in the front bottom-right by the Chancellor himself. A unique cover of historical importance