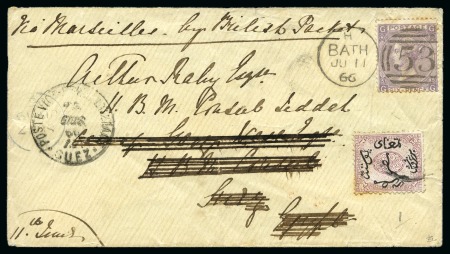 1866 Envelope from England to the British Consul in Jeddah, sent by British Packet via Marseilles with 1865-67 6d pl.5 tied by Bath “53” duplex, sent care of the British Consul in Suez to be forwarded on to Jeddah and franked with Egypt 1866 1pi tied by partial cancel, with British P.O. arrival and Egyptian despatch adjacent, London bs, some minor toning, fine and extremely rare, one of only four known covers with the combination franking (all from the same correspondence), a rarity of the first issue of Egypt