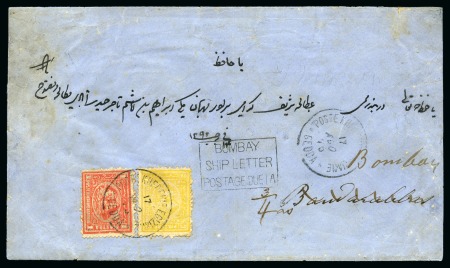 Comprehensive, valuable and extensive collection from the elusive and most sought after Egyptian Post Office. This being a major part of the award winning collection collection formed by Baron Jakob von Uexkull.

Neatly mounted and written up on 38 album pages showing entire letters, covers, envelope, stamps and fragments with a variety of different postmarks. The highlights are as follows:

– 1837 Folded entire from “Djidda 10 Decembre 1837” to Paris, France, one of only five pre-stamp covers of this period known

– 1841 Folded entire from “Jeddah (Asie) 1er Mai 1841” to Colombier, France, one of only five pre-stamp covers of this period known

– 1857 & 1859 Shipwreck covers from the “S.S. EMEU” New South Wales to London and “S.S. NORTHAM” Victoria to London, both having been stranded off Jeddah

– 1867 The Famous 1866 1pi pair tied “GEDDA” cds, this being the only multiple franking of Egypt’s First Issue

– 1866 1pi two singles, one on fragment with “GEDDA” cds’s, 1866 Incoming redirected cover from Bath, England to the British Consul in Jeddah

– 1875 Third Issue 1pi and 2pi, on redirected cover from Jeddah to Bandar Abbas and on to Bombay, apparently a unique franking (Illustrated in “The Early Postal History of Saudi Arabia” page 14)

– 1876 Cover from Calcutta to Gedda, redirected to Cairo, Egypt with unique usage of the “2” due mkg used from Jeddah

– The Famous Turkish Duloz 1pi pair, one bisected and tied by “GEDDA” cds, a unique usage with original contents

– 1878 Ship letter from Jedda to Alexandria

– Collection 204 stamps and fragments with array of different cancel type

– Collection of 119 Interpostal seals showing both red (11) and grey-blue (108) types, the later with an extensive study of the different dies & positions