1918-44, Collection of WWI & WWII US Naval Air Service and Army Post Offices in Ireland, in 3 albums

C
Back to browsing page Previous lot Next lot 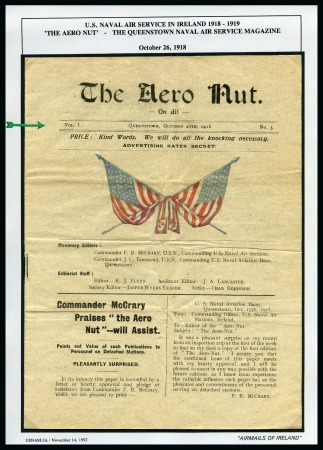 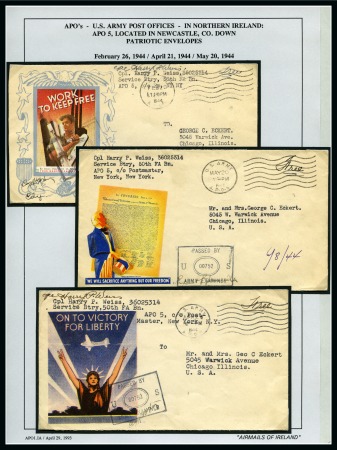 1918-44, Collection of WWI & WWII US Naval Air Service and Army Post Offices in Ireland in 3 albums, the first album focussing on the 1918-19 US Naval Service (which had 25 stations in Europe with 5 in Ireland), incl. correspondence from sailors from the training camps in the US, censored covers from Queenstown (16, some incl. violet U.S. NAVAL AIR STA. / QUEENSTOWN IRELAND” duplexes with correspondence, plus one cover incoming), Lough Foyle (2, with “US NAVAL AIR STATION / LOUGH FOYLE IRELAND” hs), Pauillac (France) and Southampton, ephemera incl. sports day programme and invitation card at the Air Station in Lough Foyle, bound set of “The Aero Nut” magazine of the US Naval Air Service Troops at Queenstown signed inside by the Commanders and Editors (then follows several pages of photocopies from these magazines), a menu from the forces at Whiddy Island, two photo postcards and a menu/programme for the farewell dance in Rosslare Strand, then 1942-44 US Naval Base at Derry (12 covers), and 130 covers from the various 1942-44 Army Post Offices in Ireland and Northern Ireland, with APO cancels on British, American and free frankings, etc., an interesting lot for the World War specilist