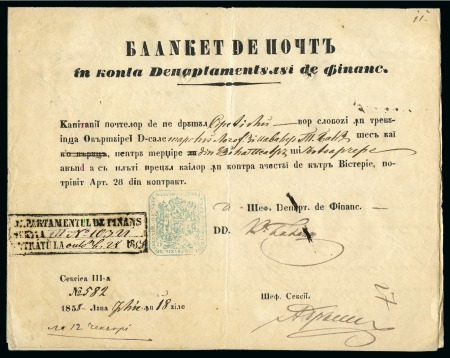 1858 (18.7) Post Ticket (Post Blanket): Decorative pre-printed form ordering to the post captains of the Botushani Route (Drumul Botosanilor) to release six horses and a coach to his lordship Grand Logofat (archaic title of a high level boyar, member of the Prince’s Council and in charge of the Royal Chancellery) and Knight T.(eodor) Bals for travel from Jassy to Piatra and back. Green octagonal handstamp dated 1857 with Moldavian coat of arms and inscribed “VOGORIDI KAIMAKAM (*) OF THE PRINCIPALITY OF MOLDAVIA PRINCE NIKOLAI KONACHI”, plus Finance Department boxed cachet in black. On the reverse the documents bears the names and the signatures and dates of all the post captains on the route – very fine, attractive and scarce

(*) the “kaimakam” was a Lieutenant of the Prince, appointed by the Ottoman Porte, during the throne vacancy – in this case Vogoridi was acting as kaimakam for the unavailable prince Nikolai Konachi

Note: Full translation of the document may be viewed on line.

Post captains of the “Drumul Bosanilor” for the benefit of the Administration, shall release six horses and a

coach to his Lordship Grand Logofat and Knight T. (eodor) Bals for travel from Jassy to Piatra and back, with

the horse payment from his account with the Treasury, according to art. 28 of the contract.

ON REVERS: signatures of the post captains on the itinerary

The present Blanket having received the approval of the Chancellery of the Post Directorate, horses shall be

captain according to the established regulations.