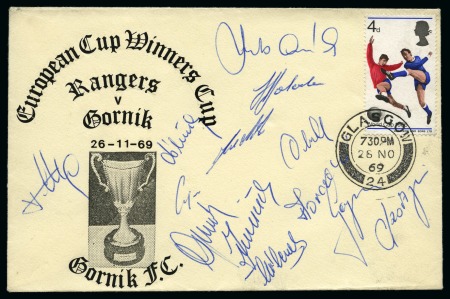 POLAND: 1934-81, Collection of Polish Football written up on 23 album pages, incl. 1934 cover sent to the Department for Sports, Warsaw Republic Stadium 1936 special cancel on postal stationery card on day Poland played Germany with ppc below, 1952 and 1955 Sports issues with stamps and FDCs, 1969 Rangers v Gornik Zabrze FC European Cup Winners’ Cup programme and three covers signed by the Gornik team that lost in the final, plus some later covers/stationery/cancels related to football and a cover signed by Wisla Krakow that player Celtic in the UEFA Cup in 1976