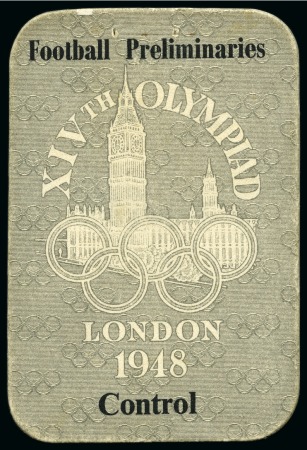 1948 London collection in an album specialising in Football, starting with QPR Olympic Trial match programme, illustrated Olympic pc signed by Liedholm (Sweden, gold medal winners), official Information Sheet with programme and prices, 1932 Portsmouth FC printed card, Football Preliminaries Control pass, signatures of the Indian football team, Football programmes (31st July and the final on Aug 13th signed by Liedholm of Sweden), nine covers/cards with Olympic cancels used on the day of the football matches up to the final incl. one written by G. Nordahl od the Swedish team talking about what he had seen of the Olympics, tickets to the Football incl. complete unused Aug 10 and used Aug 10, Aug 11 and the final on Aug 13, picture postcard of GB’s keeper Ronnie Simpson signed by him plus two other items signed by him, etc., a fantastic lot for the football specialist