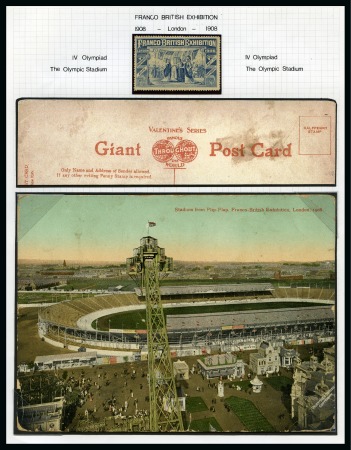 1908 London and Franco-British Exhibition collection written up in two albums with picture postcards and special cancels throughout, incl. Exhibition vignette tied to cover, pamphlet for the inauguration of the Olympic stadium, Valentine’s Giant Post Card of the stadium, Valentine’s postcard booklet (complete) for the exhibition, advertising postcards, photo postcard of Barton’s airship with flew over the stadium, British Olympic Committee vignette proofs (4), the second album with emphasis on the football competition incl. 25+ postcards with the Ballymaclinton Shepherds Bush or Franco-British Exhibition cds used on days of the football matches through to the Final plus 15 with normal London cancels, then scarce 1906-13 picture postcards of players who played for the England football team incl. Clapton Orient, Birmingham, Herbert Smith, Reading, Wolves, Luton Town (2), Tottenham Hotspur (2) and Everton (2), then several special cancels on the days of other events incl. 100m final and the Marathon, a fantastic collection telling the story of the Games with many scarce items, plus official souvenir book of the Exhibition