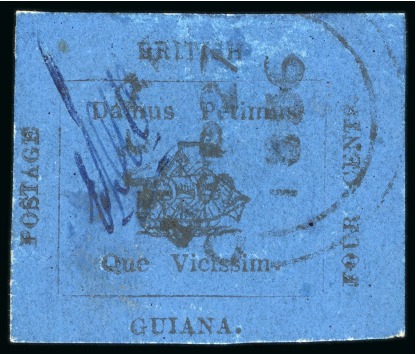 1856 Provisional 4 cents black on blue glazed surface-coloured, Type 3, initials of postal clerk Wight “EDW”, cut square with exceptional margins for this difficult stamp, central 27 September 1856 Demerara datestamp, a little rubbed at top as it is the norm for this issue, very fine and displaying a fresh colour; (SG £150’000).

An exceptional example of this tremendous rarity, belonging to the elite group of the three finest recorded in private hands; as described in the Dale-Lichtenstein sale, it is “an excellent example of a classic rarity”. According to our records, only fourteen examples have been offered at auction, of which twelve are used (six cut square and six cut octagonally), the other two being unused and used on cover; the 20 examples mentioned by Townsend most probably also include the ones not illustrated in the Ferrary sale (possibly due to a dubious nature and which have not reappeared since), and the ones gracing institutional collections.