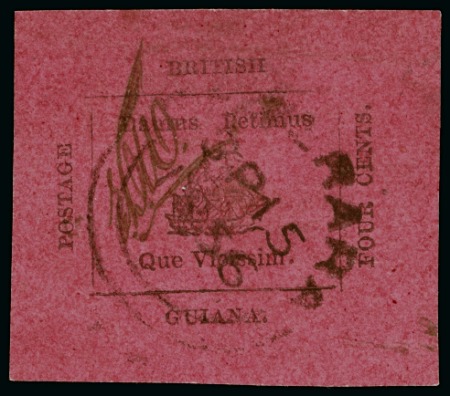 The BPA certificate mentions “tiny thin specks” which, in the common opinion of our experts, refer to only one tiny natural paper flaw located outside the design. Even if we accept the statement of the certificate, as the stamp itself (the area of the design) is in absolutely perfect condition, it has to be described as extremely fine. Consequently, this is the finest example recorded of the very rare 4 cents rose-carmine, as a result of the following features: the widest margined example of any recorded, the great freshness, and the delicacy with which the cancellation was struck leaving the design very clear. A great gem of this issue.

Note: The rose-carmine shade is much rarer than the magenta, and is often misidentified. Out of seventeen examples we have recorded, only three are known to be in very fine condition.

Census of the three cut-square examples in very fine condition: