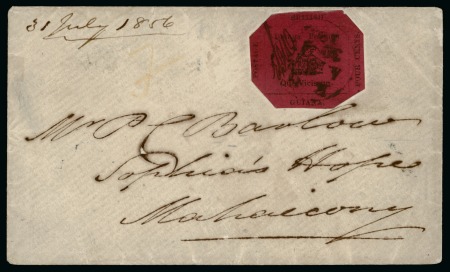 1856 Provisional 4 cents black on magenta, Type 4, initials of postal clerk Wight “EDW”, cut octagonally and displaying the complete design, used on cover to Sophia’s Hope Estate in Mahaicony, tied by the impression to the cover of the village datestamp of Williamstown “A 3 C 30 JL 1856” (matching strike on reverse), Demerara transit over flap, from the Barlow correspondence; a very fine and appealing example of this rarity; (SG £75’000).

One of only four 4 cents magenta covers recorded with a village postmark.