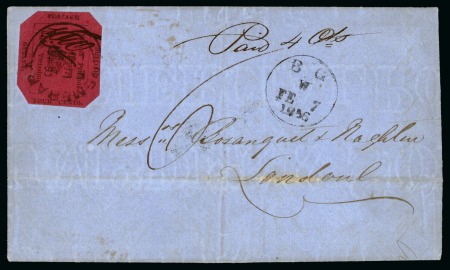 THE EARLIEST COVER RECORDED OF THE 1856 TYPE-SET ISSUE

1856 Provisional 4 cents black on magenta, initials of postal clerk Wight “EDW”, cut octagonally, very fresh and in brilliant colour, used on cover from Plantation Caledonia to London (full letter inside regarding cost of coolies), prepaying the inland letter rate as denoted by “Paid 4 Cts”, posted at Wakenaam with “BG W” cds on 7 February 1856, stamp then cancelled in transit by Demerara datestamp on 8 February (trace of tie at top of stamp), letter subsequently charged “6” for sixpence Uniform Packet rate in London (arrival 20 March on flap); (SG £75’000).

The earliest known cover of any stamp from this whole issue. Fourteen covers are recorded bearing this stamp (four offered in this sale), this having the added significance of being one of just two sent abroad and one of the finest of all. One of the great highlights of this collection, an exhibition showpiece.

Census of covers according to our records:

– 2 May 1856, cut square, money letter, currently in a private collection

– 11 July 1856, cut octagonally, in mixed franking with G.B., ex dale-Lichtenstein and currently in a private collection