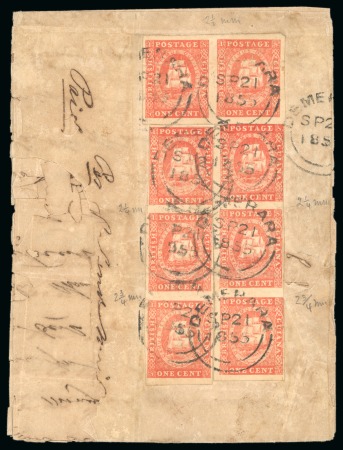 1853 Waterlow lithographed 1 cent vermilion, two vertical strips of three, one with complete to good margins, the other just touched in places, plus a well-margined horizontal pair, used together on double rate letter “Paid” from William’s Town to Water Street in Georgetown, tied by 21 September 1855 Demerara datestamp, parts of address panel missing, cover edge wear and some stamps affected by creases.

This spectacular franking including eight stamps on cover, being one of three recorded, is the highest known bearing this stamp; of much greater significance is the fact that this is the highest multiple franking of any imperforate issue in British Guiana.