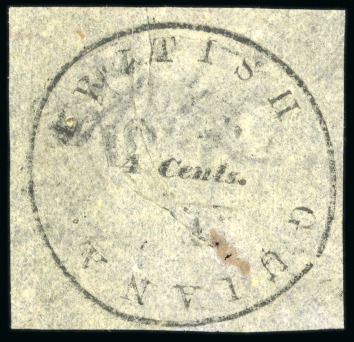 THE “ALMOST” UNUSED EXAMPLE OF 4 CENTS ON PELURE PAPER

We have recorded only sixteen examples of this stamp in private hands (two on cover, both included in this sale), of which six are cut square, this having the added significance of being used with the lightest strike, which makes it appear almost like an unused stamp, and it is additionally enhanced by being one of three showing full margins all around. A very much underrated great philatelic rarity.

– Demerara cds on 20.7.1851, touched margins, currently in the Greenwood collection