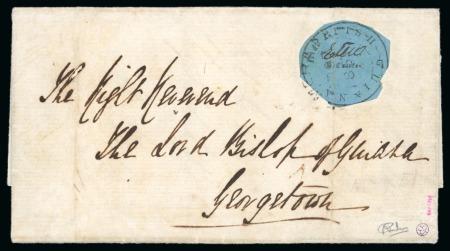 THE UNIQUE AND MOST VALUABLE “BURRUS – TWO CENTS” ERROR ON COVER

The only example recorded of this famous variety, which together with the 1865 1c Magenta, is regarded as one of the two most important rarities of British Guiana.

ONE OF THE WORLD’S GREATEST AND OUTSTANDING PHILATELIC ICONS AND ONE OF THE MOST FAMOUS OF BRITISH EMPIRE ERRORS. A must for the most discerning collectors looking for top rarities of the world, and a museum piece with the greatest provenance, including the two most renowned collectors of philatelic history: Ferrary and Burrus.

The AIEP expert Jean-François Brun, in a recent article, took the alternative position that the numeral of value is really an “8” rather than a “2”. In Mr. Brun’s opinion, this would mean that this stamp is an unrecorded error of paper colour for the value. The “normal” 2 Cents (a great rarity in any form) is on rose paper, and the normal 8 Cents is on green – so in either case, the stamp is acknowledged as the unique error of colour!

In the Maurice Burrus sale by Robson Lowe in 1963, this item was described as: “Although creased by the letter and irregularly cut, this error ranks with the mutilated example of the 1856 1c in as much as each is believed to be unique”. Both jewels of worldwide philately, the “One Cent magenta” and the “Two Cents Error on Cover”, were equally considered in terms of rarity; the 1856 1c Magenta, whose previous owner was the famous shoe designer and entrepreneur Stuart Weitzman, was recently sold by Sotheby’s in June 2021 for $8,307,000.