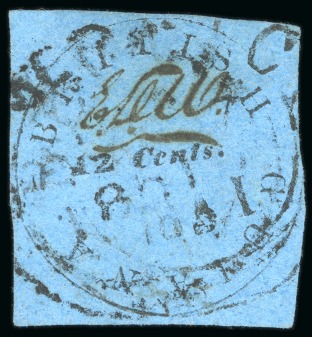 THE FINEST CUT-SQUARE EXAMPLE KNOWN OF THE NUMERAL ERROR

Only six examples are recorded of this error, including three being cut square, additionally this gem ranking as the finest with its premier condition quality.

Note on the provenance: The American philatelist Frederick L. De Coppet left his signature on the back of the stamp. Although quite unknown to many philatelists today, De Coppet was one of the major collectors of the XIXth century as well as the most relevant of America. The sale of his collection in 1893 was the most important philatelic auction in the XIXth century, which was held by the J. W. Scott Co. Ltd. in New York, and it attracted the attention from collectors around the world. As a confirmation of the importance that British Guiana had already at that time, a 2 cents Cotton Reel offered in that sale was sold for $1’010, the record price for a single stamp then. The sale was defined in the “American Journal of Philately” as “without doubt, one of the most important events in the history of philately, as it presented to the stamp world the finest array of material that has ever been offered at public sale”.