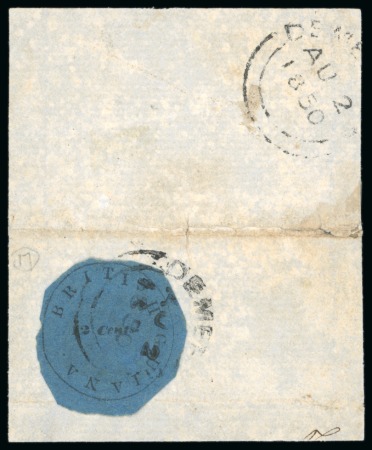 1850-51, 12 cents black on blue, Townsend Type B, without initials, cut round mainly displaying very large margins, appearing all clear of the circular frame-line, strong deep shade, affixed to large piece by sealing wax and tied by Demerara datestamp on 2 AUGUST 1850, one month and one day after the “Cotton Reels” were issued (1st July 1850); (SG £11’000+).

The earliest recorded usage of a British Guiana postage stamp, as well as the earliest of any British Colonial issue in the whole American continent (not considering the “Lady McLeod” of Trinidad, which was a private ship letter stamp). Of two items recorded with this date, this is the vastly superior in quality (the other item being a 4c on orange, ex Champion, Gilbert and “Tatiana”), as in this example the datestamp clearly exhibits the date.