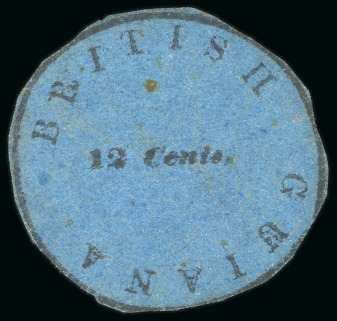 ONE OF THREE UNUSED 12 CENTS RECORDED

1850-51, 12 cents black on blue, Townsend Type A, thick frame, without initials, cut round with the circular borders of the stamp being visible all around, small stain spot at top, in an uncommonly deep bright colour; (unpriced in SG).

One of only four unused examples recorded in the “Cotton-Reel” primitives, this being one of three representing the 12 cents (the other two with initials, one sold in the Hind sale in 1935, the other belonging to the J. Simon Greenwood collection); one of the great unused rarities of the British Empire.