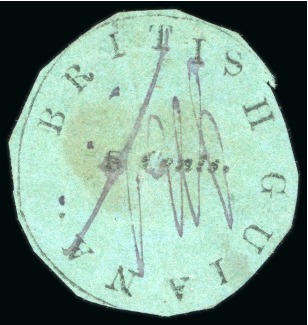 THE RAREST UNUSED STAMP OF THE BRITISH EMPIRE

1850-51, 8 cents black on blue-green, Townsend Type C, faint initials “JBS”, thin frame, uncancelled, cut round showing most of the frame, stained from sealing wax and mild vertical crease of absolutely no significance for a rarity of this worldwide calibre; (unpriced in SG).

Only four “Cotton Reels” in unused condition are recorded, of which three represent the 12 cents denomination, this example being clearly the most important as it is the only recorded for the 8 cents denomination.

THE RAREST UNUSED STAMP OF THE BRITISH EMPIRE AND ONE OF THE GREAT GEMS OF WORLDWIDE PHILATELY. Its importance may be compared to the unused “Missionary” 2 cents of Hawaii (sold in 2018 by Robert A. Siegel Auction Galleries for $525’000 plus buyer’s premium).