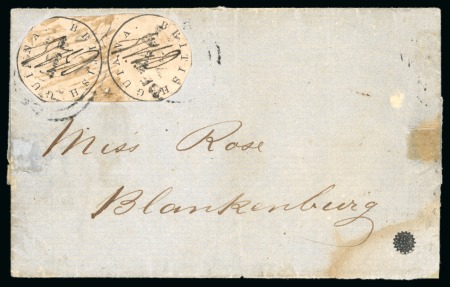 ONE OF THE MOST CELEBRATED COVERS OF THE BRITISH EMPIRE

1850-51 2 cents black on pale rose, vertical pair, both being Townsend Type C showing the usual thick frame line, with initials of postal official Dalton “E.T.E.D.”, partially cut round showing portions of outer frameline, clearly tied by two strikes of “DEMERARA/5.AU.1851” double-arc on entire letter addressed to “Miss Rose, Blankenburg”, this cover being found by Miss Rose when she was asked to donate any early stamps to a charity bazaar taking place in Demerara, with the proceeds going to Christ Church; (SG £650,000 as two singles).

The earliest known cover of the just three recorded exhibiting this denomination, this bearing the only known examples of type C, with the other eight, comprising two pairs and four singles, being type B. Of the ten 2 cents examples recorded, only two single stamps and two covers are available to collectors, the third cover being part of the collection of the Queen, and the two singles belonging to the collections of the British Library in London and the Post and Telecommunications Museum in Bonn (Germany). In addition, this is the only cover where the cancellations tie the stamps to the outer letter sheet.

This cover exhibits the rarest value of the “Cotton-Reel” primitives and is consequently also regarded as one of the most important covers of the British Empire.

ONE OF THE THREE MOST IMPORTANT ITEMS OF BRITISH GUIANA. A SUPERLATIVE RARITY OF WORLDWIDE PHILATELY. In the 1977 Claude Cartier sale by Stanley Gibbons, it was described as “one of the ‘top ten’ philatelic rarities”.

The catalogue value of two singles off cover is £650,000, which seems very conservative compared to the prices for which major British Empire rarities have sold lately, as the British Guiana 1c Magenta (sold for $8.3 million) and the Mauritius ‘Post Office’ 1d ‘Ball Invitation’ cover (sold for hammer €8.15 million).

Note: The 2 cents stamps were issued in 1851, eight months after the other values. It was issued to pay a local town letter rate (the Georgetown Penny Post), a service which was unpopular and little used. No town post usages are known to have survived. It is not known how many stamps there were to the sheet; the method of printing suggested is that the four tubes were arranged in a straight line in a form to print a strip of four at each operation of the press. The three recorded multiples of the 2 cents establish that the stamps in the lower row were vertically below the stamps in the upper row; the three multiples are vertical pairs , and in no pair is there more than one type, with the two stamps being well aligned one above the other, although the distances between stamps vary, with the conclusion being that the paper was repositioned by hand in the press to enable the next row to be impressed. The 2 cents was first discovered by N. R. McKinnon in 1877.

Provenance (as listed in the Encyclopaedia of Rare and Famous Stamps by L.N. Williams, both stamps numbers VII and VIII):

1922 Arthur Hind bought the letter through Charles Phillips for about $5,000

1996 November 28th – December 2nd ANPHILEX ´96 New York display as Aristocrat of Philately No. 8 on loan from an anonymous collector

2016 Acquired privately by the current owner

THE STORY OF THE “MISS ROSE” COVER

This is one of the most remarkable philatelic finds ever made. On Easter Day 1896, Christ Church in Demerara was overdrawn at the bank to a sum of £100 or so, and in order to make the instalments on the mortgage and other claims, efforts were being made to raise money. An old lady, Miss Preston, sent two stamps as a donation which were sold for $33.60 and so on Easter Monday Canon F.P.L. Josa visited Miss Preston to thank her for the gift. Whilst there he enquired if she had any more stamps as buyers were offering over £100 for the 2c. rose of 1851. Miss Preston told him that she had given all her stamps away but then brought out an old basket filled with receipts and bills, and it was here that Canon Josa discovered the ‘Miss Rose’ letter. As it happened, Miss Rose herself was present in the room as the discovery was made and was overjoyed to be able to give something worthwhile to the church. This happened in Blankenburg (also indicated in the addressee’s panel), the plantation on the west coast where Miss Rose had her residence.