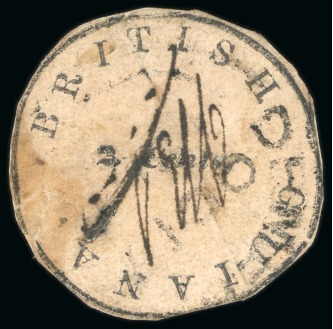 THE TWO CENTS: ONE OF TWO EXISTING SINGLE EXAMPLES IN PRIVATE HANDS

1850-51, 2 cents black on pale rose, Townsend Type A, with initials of postal official Smith “JBS”, cut round, with central 7 October 1851 Demerara datestamp, usual defects (see certificate) of no significance for such an important rarity; (SG £325’000).

The rarest stamp of the legendary “Cotton-Reel” primitives, being one of the only two single examples remaining in private hands. Two pairs, each on cover, are also known outside institutions, of which one is offered in this sale; the other two single stamps belonging to the collections of the British Library in London and the Post and Telecommunications Museum in Bonn (Germany).

Note: This 2 cents value was issued in 1851 to pay a local town letter rate (the Georgetown Penny Post), a service which was unpopular and little used, with no town post usages being known to have survived. This is the first example of the 2 cents circular to be found, being discovered by N. R. McKinnon in 1877, a local resident and well known vendor of British Guiana stamps at that time.