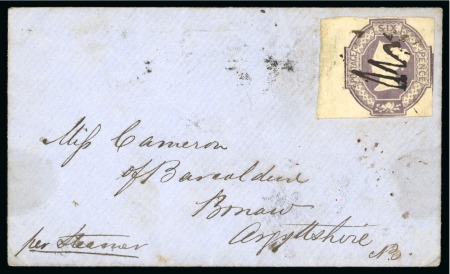 THE EARLIEST KNOWN GREAT BRITAIN USE FROM SOUTH AMERICA

1847-54, G.B. embossed 6d lilac, clear to enormous margins originating from the left of the sheet, paying the uniform British Packet rate of sixpence, used on cover from Berbice “per Steamer” to Scotland, cancelled by pen-strokes, with despatch 24 March 1856 cds of Berbice (small sans-serif) on reverse.

An unlisted (by Stanley Gibbons) use of the Embossed issue from the Colony, and only known use from British Guiana. A major rarity of Great Britain used abroad as the earliest known use of a Great Britain stamp from South America.

Note: As the British Guiana stamps then current were only valid in the colony, prepaid mail to Great Britain and other countries required the use of British stamps. These were sold and used from Berbice (New Amsterdam) and Demerara (Georgetown), and available from 11 May 1858, when the stamps of British Guiana were valid only for local postage (until 1 May 1860).