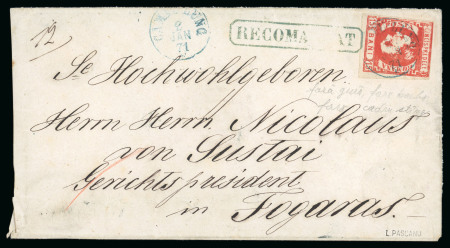 1871 (Jan 7) Registered cover sent to Fogaras (Hungary) franked with a 15b vermilion, Carol I with whiskers, imperforate, three margins cancelled by a Campulung blue cds to front paying the near distance rate, and a 25b orange and blue, Carol I with whiskers, imperforate, four good margins, tied to the back by Campulung blue cds, paying the registration fee; the near distance rate to the Austrian Empire was 15b (the normal rate was 25b), and nearly all the covers bearing this rate were sent to Itzcani; a cover sent registered to Hungary at the 15 Bani rate is a major rarity.