Lot 40010 – 1865 Cover forwarded from Alexandria (Egypt) via Trieste, where it was posted, to St. Petersburg 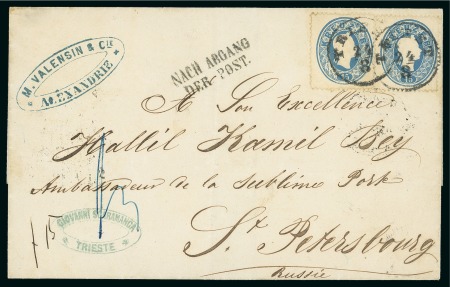 1863 (Aug) Cover forwarded from Alexandria (Egypt), posted in Trieste on 24 August and sent to the Ambassador of the Ottoman Empire in St. Petersburg, franked by two very fine examples of 1861 15kr blue, tied by Trieste cds’s, alongside struck with “NACH ANGANG/DER POST.” two-line hs, two “weiterfranko” notations at lower left, Prussian transit and arrival on reverse, an exceptional combination of both rare origin and destination.