1860, 120c. blue, subtype 6A featuring sun without rays at base. One of only six transatlantic covers in all the “Sun” Issues, 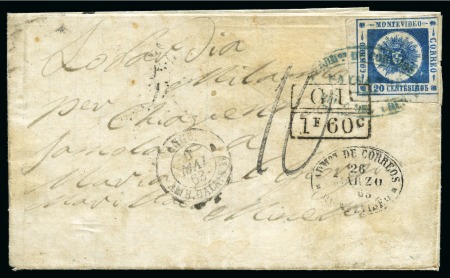 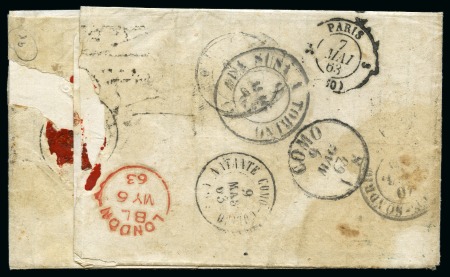 1860, 120c. blue, subtype 6A featuring sun without part of lower rays, cut slightly into at right, ample to large margins on other sides, on 26 March 1863 folded cover to Chiavenna, Italy, tied by Paysandú double oval in blue on dispatch, paying the internal postage to Montevideo, where it was embarked on the “Magdalena” to Southampton; stamp additionally tied by “GB/1F60c” Anglo-French accountancy marking, with French entry cds and “10” charge mark, struck on reverse with London, Paris and Italian transit cds’s. One of only six transatlantic covers in all the “Sun” Issues, this being unique with the franking additionally tied by the accountancy marking and showing this prominent and charismatic subtype, a fascinating and unique postal-history usage.