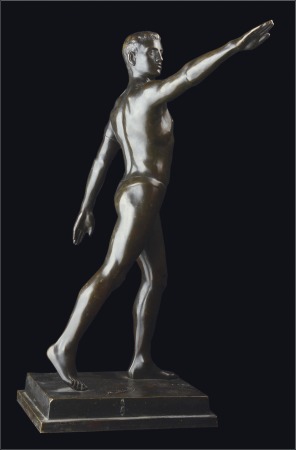 Lot 10066
Olympics » Olympic Statues
Price realised
Unsold
Estimate
400 EUR
Auction date
Tue 27 Oct 2020 at 09:30 (Europe/Zurich)
Description:
Athlete in bronze performing the Olympic salute, made by Muller CH and signed by artist, 49cm tall, mounted on bronze plinth 17.5cm x 23.7cm, right arm shows cracking in the arm, an attractive showpiece Note: In this Olympic salute, your right arm should be held out, slightly to the side, and pointing in an upward angle. Likewise, your palm should be out and your fingers touching. The Nazi salute is more or less performed the same way, except it is customary to hold your arm straight in front of you, instead of partially to the side. As you might imagine, the Olympic salute fell out of favour after WWII. Despite this, the International Olympic Committee hasn’t yet replaced it with a different salute, even if nobody would dare use it any more for fear of being misinterpreted.
Auction
2020 October Autumn Auction Series
Catalogue
Olympics