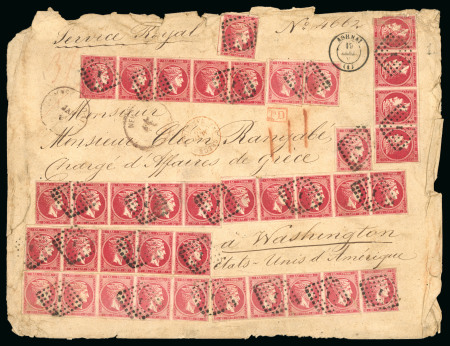 1867-69, Cleaned Plates Printing, 80L carmine or rose carmine, the astonishing 69 examples on 19.12.1868 large registered envelope from Athens addressed to The Greek Minister of Foreign Affairs in Washington, comprising four singles, one strip of four and six strips of five displayed on front, and on reverse exhibiting two strips of three and five strips of five, tied by “1” dotted lozenge with Athens cds on front, transits including red Marseilles applied when it entered France, Paris cds on back and transit through New York on obverse;, apparently four stamps are missing on reverse and cover edge faults as it must be expected in this large format, in no way detracting from this, the largest franking of classic Greek philately and one of the most important items of Greece, of striking visual impact for an exhibit of the highest calibre.