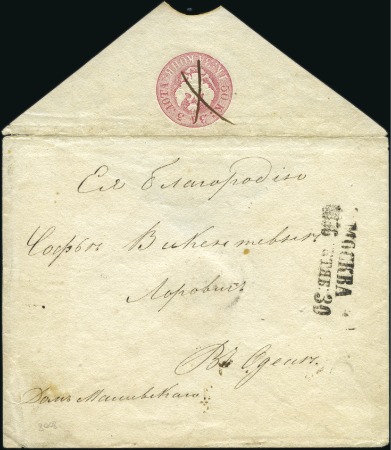 Lot 10022
Russia » Russia Imperial Pre-Stamp Postal History
Has PDF Scans
Price realised
10’000 EUR
Estimate
12’000 EUR
Auction date
Wed 19 Sep 2012 at 09:00 (Europe/Zurich)
Description:
1848 30k Red Carmine, 2nd issue, small tail, 1st watermark inverted, used with pen cross and at front 2-line departure pmk MOSKVA 1856 Okt.30 to Odessa, EXHIBITION RARITY – less then 10 envelopes of the 30k used are known of which maybe 2-3 have the inverted watermark. Bought by the Faberges already in 1906 (annotation inside), it came only once to auction, at the first Faberge auction in Finland after O. A. Fabergé’s death in the early 1990s and remained since then as one of the jewels in the Oaktree collection. According to Mr. Mikulski’s well respected opinion, this is the nicest of the few used 30k envelopes in existence; cert. Mikulski
Catalogue reference: 6a Ta
Auction
September 2012 Auction Series
Catalogue
Russia