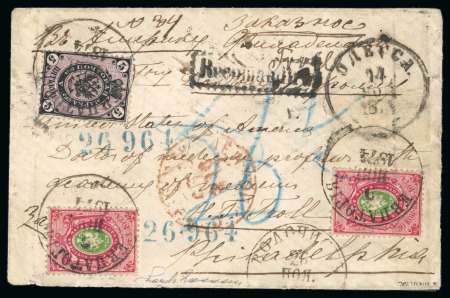 Russia. 1874 (Nov 9). Registered cover from Yevpatoria, Ukraine, to Philadelphia, bearing 1866 5k and two examples of 30k, each tied by dispatch cds, initially forwarded via Odessa, where it received the cds at top right, showing ms notation on reverse denoting that it had to send back following the railway line n. 47 of Zhmerika-Volochisk (instead of continuing its journey by ship); back in Yevpatoria it was redirected to Volochisk on 21 November, with corresponding cds dated 26 Nov. at base on front, then carried via Prussia with „Recommandiert“ framed hs and blue crayon debited sgr fee to Hamburg, being placed on board the Hapag „Westphalia“, New York red transit on obverse, small cover edge tear at right; an outstanding cover for its rarity as probably the only known pre-UPU registered mail originating from Ukraine, the scarce franking including two 30 kopeks and the interesting postal route; cert. Mikulski (1997) and Vaccari (2015); ex Paolo Bianchi.