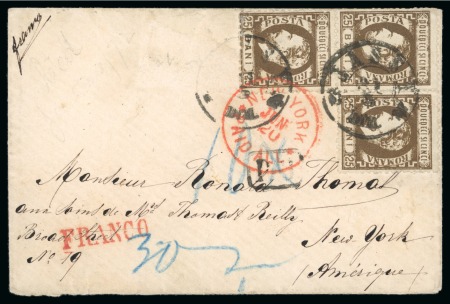 Romania. 1873 (?) (May 21). Cover from Jassy to New York, carried at 85 bani rate with 1872 25b perf. 12 1/2, irregular block of three, with 10b stamp missing, routed via Austria to Germany where it was struck with red „Franco“ straight line and „30x“ blue crayon, carried by the Hapag „Hammonia II“, red „Paid All“ New York cds also tying the franking; an extremely rare transatlantic mail from Romania in this period -another cover from the same correspondence was described as „a unique and extraordinary transatlantic usage…“ as part of the „Cornelia“ collection and it was offered at CHF20’000 in 2007-.