Los 60078 – A UNIQUE EXAMPLE OF MAISSANA CANCELLATION WITH ASTERISK 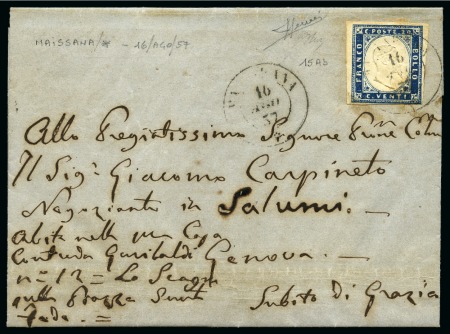 1855-63 20c indigo, clear to large margins all around, tied by „MAISSANA/16 AGO 1857/*“ cds with „rosetta“ (asterisk), repeated alongside on folded cover to Torino, the only example recorded of this cancellation with „rosetta“, which was discovered in 2016 and consequently registered in the subsequent edition of Sassone Annullamenti with the highest degree of rarity; cert. Sorani (2016); Sassone R3, €35’000.