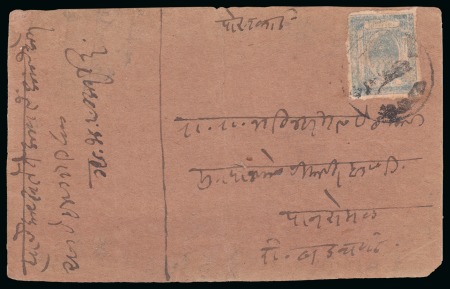 History of Barwani – The Indian state of Barwani had a population of only 141,110 in 1931, many of whom were illiterate. Despite this small size the postage stamps issued are technically interesting from a philatelic point of view. Except for two stamps issued right before the Barwani post office closed (two 1/4 anna stamps, Printing 9), the evidence tells us that Barwani stamps were only issued for actual postal service. The exhibit will illustrate the development of Barwani postage stamps from the first issue of 1917 to the close of the State Post on 1 July 1948 when Barwani became part of independent India.

Barwani Stamp Designs – Barwani postage stamps picture two rulers, Rana Ranjit Singh who ruled from 1894 to his death in 1930 and Rana Devi Singh who ruled (originally as a minor) from 1930 until 1948, he was eight when his father died. Devi Singh stamps were firs issued in October 1932 and continued to be issued until 1948. Ranjit Singh stamps were reissued in July 1933 and continued to be printed to 1948.

Organization – Up to the first Devi Singh stamp in October 1932 the organization of the collection is by the approximate order that stamps were issued. From October 1932 until 1948 the stamps are presented as issued and also organized into nine printings.

Technical Details – Barwani stamps are typographed and four clichés of each stamp were used to print a sheet of stamps or the cliché(s) were used to make a new printing plate. Issues to about 1930 were printed by the Barwani State Printing Press and later issues were printed by the Times of India Press, Bombay. Most, if not all, Barwani stamps were sold to the public in booklets. Usually there are four stamps to a booklet pane and eight sheets in a booklet.

Stamp Printings – The Stanley Gibbons catalog order for Barwani stamp printings has been altered based upon an article in the Collectors Club Philatelist, March 1978 to September 1978, by MacGillycuddy and by covers in this collection that pre-date the first cataloged stamp and are not recorded by MacGillycuddy. Also, specialists have found in the Barwani State Postal Archives information on the number of stamps printed and issuance date for the first six printings beginning in October 1932 and this information updates the printing order presented by MacGillycuddy.

Descriptions & Highlights – 1917-1947 This outstanding collection expertly presented on album pages shows covers and cards with the earliest usages of the first stamps, many extremely rare or possibly unique frankings. Stamps with essays, proofs, unused & used with single, multiples, blocks and sheets, showing a variety of shades, papers, printings and perforations including imperforate between varieties, some with plate and printing error. It is important to note that items and personal study findings are highlighted by presentation techniques such as underlining, bold type and boxes. Gibbons lists 52 basic stamps. All are shown in sheets, one a reconstructed sheet. Gibbons also lists 42 varieties, all except seven are shown. This is without doubt the most important collection of Barwani state ever formed

Photo & Scans – A small selection of the rarer items are showing in this catalogue, however the entire collection can be viewed in pdf format on our website at www.davidfeldman.com