Los 10768 – HUNGARY: Collection written up in an album incl. specialised section on the famous defeats of England in 1953 and 1954 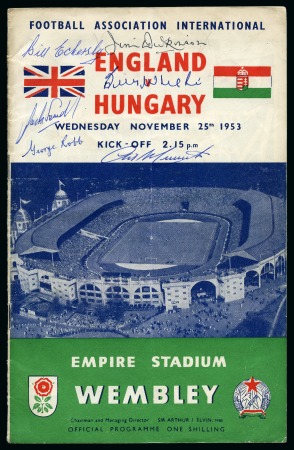 HUNGARY: Collection written up in an album incl. a specialised section on the famous defeats of England in 1953 and 1954, starting with 1925 Sports set perf., imperf. and on cover with football roller cancel, then many signed items by the Hungarians and the English incl. cover signed by Puskas, Grosics, Kovacs, Hidegkuti and Lorant, a programme of the match signed by Billy Wright, Eckersely, Dickinson, Sewell, Robb and Merrick, a ticket stub and a pirate programme for the same match, „The Match of the Century“ printed book by the Hungarian News Service, a cover signed by players from both teams incl. manager Alf Ramsey, two pieces signed by Puskas, incl. photos of the players with the vendor of the collection and letters from Robb, Eckersley and Dickinson after he asked them for autographs, a fantastic lot