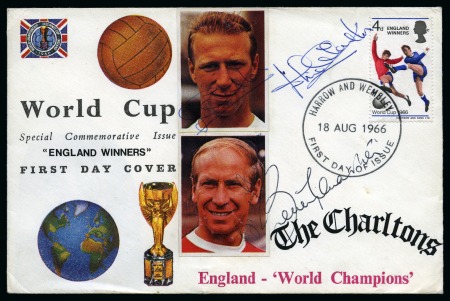 1966 WORLD CUP: Group of signatures from the England World Cup winning team incl. Bobby Moore on Southend United compliments slip when he was a manager there, George Cohen handwritten letter on headed paper from his property company, handwritten letter from Ray Wilson and signed photocard of himself affixed to cover, Alan Ball signed letter on Portsmouth FC headed paper plus two signed picture postcards of himself sent from Wembley, letter from Jackie Charlton on Ireland FA headed paper when he was manager, 1966 official illustrated FDC signed by both Jackie and Bobby with their pictures attached, picture postcards of the player signed by themselves incl. Geoff Hurst (2), Gordon Banks, Jackie Charlton and Roger Hunt, a lovely lot, all letters and many of the signatures dedicated to the same person