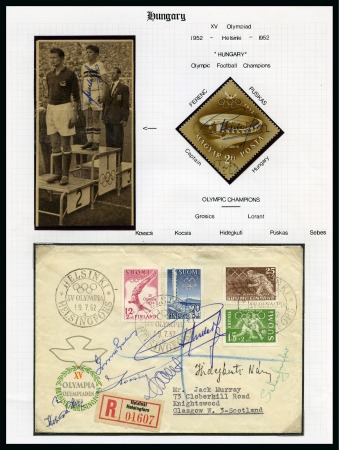 1952 Helsinki collection written up in an album with emphasis on football with 21 covers/cards with Olympic cancels on the dates of the various football matches incl. one signed by several players incl. Puskas and referee Arthur Ellis, Aug 1st and 2nd football tickets used, piece signed by 12 of the Hungarian team plus several more signed covers, cards and stamps by the Hungarian team and Ellis who refereed the final, several football postcards, page signed by the famous runner Zatopek, finishing with issues of other countries with perf., imperf, maxi cards, etc., a nice lot for the football specialist