Los 10164 – The Bob Wilcock collection of the Marathon 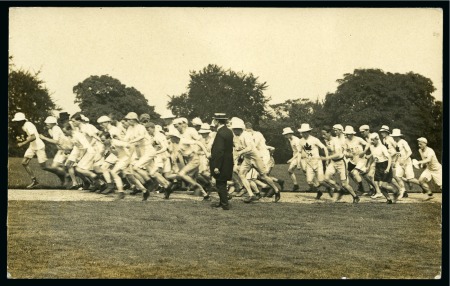 1908 London. The Bob Wilcock collection of the Marathon mounted on 38 pages, starting with a page for the pre-Olympic Trial Marathon with ppc of the winner, then following the course of the Marathon and its participants, with ppc from the start of the race (3), then at Sovereign’s Gate down Castle Hill (4), Thames Street, message on postcard sent on the day „Talk about crowds here“, ppc of Thomas Jack in the lead, ppc of Dorando 5 miles in, ppc of Hayes at the half-way point, ppc showing Jack Price leading at 14 miles, then Dorando & Longboat (2nd & 3rd) at 15, 16 and 17.5 miles, Hayes at 17.5 miles, Dorando at 21 miles, Dorando at 23.5 miles (2) followed by the same for Hayes (2), Dorando at 24 miles and Hayes the same, stereo-view card „waiting to see the marathon race“, 2 of the awaiting crowds, then Dorando’s arrival into the stadium, 4 „Health & Strength“ series pcs of the leading athletes, Dorando crossing the finishing line (5) incl. one with message „This is when the English tried to do the Americans out of the marathon race“, Hayes finishing, official pc with message „We are going to see the finish of the great marathon race in the stadium on Friday. Its the event of the games“, the Queen presenting the cup to Dorando (4) plus pc with message „I saw the Queen present the gold cup to Dorando“, Dorando holding the cup (3), Hayes being carried by his team mates, ppcs after the race incl. Thomas Jack signed ppc of himself, Hayes at an exhibition run, 2 advertising pcs of him for shoes, Dorando advertising Oxo his mother’s hotel & his car garage (two signed by him), and a ppc of him with all his medals and trophies, a fantastic and fascination exhibition collection telling the story of this famous race, an extremely difficult to replicate