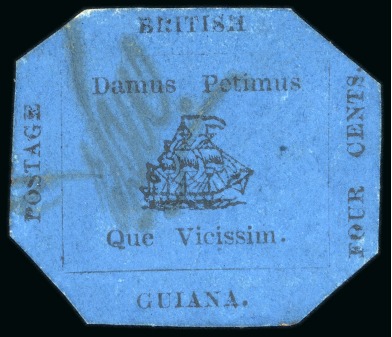 ONE OF THE MOST VALUABLE UNUSED STAMPS OF BRITISH GUIANA

1856 Provisional 4 cents black on blue glazed surface-coloured paper, initials of postal clerk Wight „EDW“, cut octagonally displaying good margins, uncancelled, very minor surface blemishes which are almost invisible, the glazed surfaced being in outstanding condition for this paper; this example must be regarded as of exceptional quality and as one of the finest known also taking into consideration the used examples; (SG £150’000 for used examples, uncatalogued as unused).

An outstanding world rarity: the unique unused example recorded, one of the two rarest and most valuable of all unused stamps of British Guiana, an absolute gem and rarity of the highest degree in the British Empire, being presented in this sale for the first time, as an unused example, with all its deserved eminence.

Note: This stamp was previously offered at auction in the sales of the collections formed by Ferrary, Burrus, Gilbert and „Tatiana“. It was always described as used, although there is not any trace to arrive to the conclusion of that statement, which was most presumably due to the fact that the stamp was unknown as uncancelled, and they took in for granted that it had to be used. After the Ferrary sale, the other three name sales adopted the opinion as „used“ as a norm, without questioning that condition. The prestigious expert committee of the British Philatelic Association issued a certificate in 2016, where it was finally described as uncancelled, with all its deserved importance. Our experts in David Feldman International Auctioneers have carefully examined this example, and no sign has been found to believe that this stamp was ever used, thus corroborating the statement in the certificate.