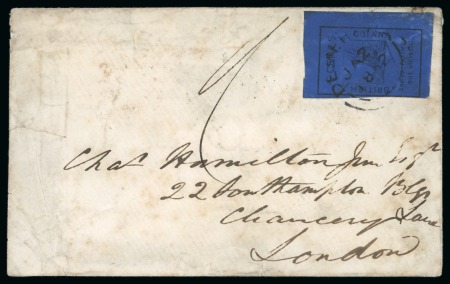 1852 Waterlow 4 cent black on deep blue, a marginal example from the right of the sheet, showing complete to huge margins on three sides, used on 27 January 1852 cover to London, tied by light Demerara datestamp („7“ of „27“ omitted, with a further strike on flap having the „7“ inserted by pen), charged one shilling packet postage in London, stamp with left frame line very slightly touched and the lower right corner showing a small tear which is confined to the sheet margin and does not impinge on the design.

The only cover recorded bearing this rarity sent to a foreign destination, and of much greater significance, the earliest external British Guiana mail franked with postage stamps, as well as, with the exception of Brazil, the earliest transatlantic bearing a South American stamp. Without doubt, one of the most significant covers in existence crossing the Atlantic from South America.