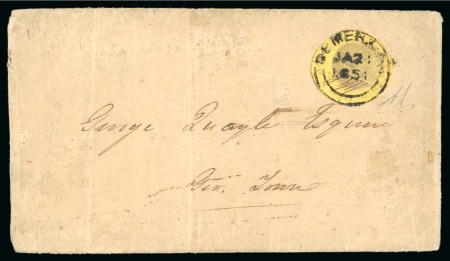 1850-51, 4 cents black on orange, with initials of postal official Lorimer „WHL“, cut round with good margins for this stamp, used on cover (with letter inside) from Mahaica to Georgetown, showing uncommon centrally struck Demerara datestamp of 21 January 1851, tied at foot of the stamp to the cover; (SG £64’000+).

Only five covers are known with this stamp, this being further enhanced by exhibiting the most beautiful cancellation and being the earliest recorded. Additionally, one cover exists bearing a 4c and an 8c.