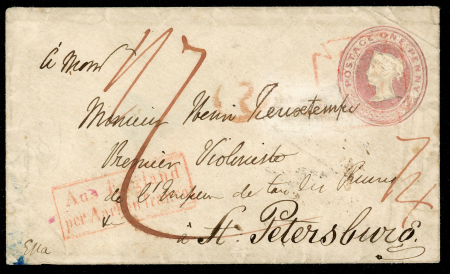 1850/51 1d. pink postal stationery envelope to St Petersburg Russia via Belgium, cancelled by London branch office Paid ds in red, rated „1/7“ in manuscript for the route via Belgium, The rate to Russia via Belgium was prepaid in cash the Prussian share (7d) and the Russian share (4d) are marked in red; a very rare and early overseas destination for a 1d. pink and believed to be the only recorded use to Russia; the black ink deleting the name of the addressee has been skilfully removed not detracting from the very fine appearance. Karl Louis Certificate (2001)